It is always important to ensure who ever is packing your goods into shipping containers knows how to correctly stow them. We see many containers where the goods packaging has been damaged and in some cases the actual goods as well. Damage to the cartons is particularly important if they are going straight out to the end buyer. Nobody likes receiving boxes which are squashed, torn  or generally misshapen.

Often the issues we see could have been avoided with a little care. As seen in the photo below. The box on top of the other box probably was fine when initially packed in, but due to not being stacked directly on top of the other one and combined with being some space inside the box. As the container has move it resulted in the box settling and distorting. All because a little care was not taken when initially loaded. 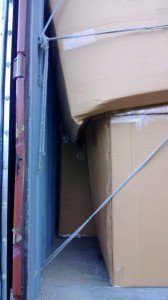 Crush damage due too much weight being placed ontop of another box is further typically seen issue. Again what often happens is that boxs which can be stacked say 5 high in stable warehouse, when loaded into a container which then spends 4 weeks rocking back and forth while in transit, causes the bottom boxes to become squashed and in worst cases torn open. It is important to ensure that the cartons goods are shipped in are strong enough to be stacked the same in container as in a warehouse