Break bulk shipments and Out of Gauge generally refers to the movement of non containerisable cargoes. In the modern world driven by complex supply chains the majority of dry goods are containerised, however this still leaves a wide range of cargoes that cannot fit into a standard container. These shipments are referred to as Out of Gauge cargoes often shortened to the term OOG.

At AJF we have been involved in moving break-bulk shipments around the world since the company was founded. The company’s joint owner is a break bulk specialist having over 40 years of experience, and is one of the top specialists in this sector in Europe. Often AJF is the first port of call for both shippers and other forwarders when planning cargoes and we have been involved in shipments moving all over the world. When issues have arisen with break-bulk movements our experience in this field has proven invaluable for our clients. 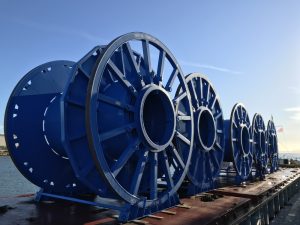 An example of breakbulk cargo

When AJF is evaluating shipping an OOG cargoes we evaluate the best shipping equipment or method to use. For some cargoes it may be possible to move them on a flatrack or opentop container. For larger cargoes and non standard ones such as those which are over length, width, height or weight then we would may arrange to have the cargo moved using a part charter or full charter of a vessel. We would assess if the vessel need to be geared (have its own onboard cranes) or not, depending on the loading and discharge ports. It is not much use having a vessel turn up and find out the local cranes can not handle the shipment. Depending on the shipping terms and what we are contracted to cover then we would check out the specifications of the ports being called at. This would included maximum weight which can be placed on the quay. You do not want the cargo overloading the quay and causing it to collapse, which has happened in the past. 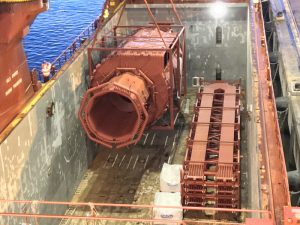 Breakbulk cargo being loaded into a vessel

AJF has recently been contracted to move vehicles from the UK to Dubia, UAE. Initially it was planned to moved these on flat racks. The size of the vehicles meant that it was going to be a very tight fit to ensure that once the vehicles had been secured to remained in gauge and avoid damage when being loaded.  We therefore looked at other options and it was decided that the most cost effective and safest route was moving them using a RO/RO vessel from Southampton. All the cargo was move successfully and without any damage.

A second case study involved another forwarder which had arranged a charter of a vessel to move an oil project. However the vessel operators got into difficulties and the forwarder was unsure of his liabilities and how to get the goods to the final destination. We were asked to look at the situation and were able to devise a course of action to ensure the cargo was not going to be abandoned. The cargo was finally delivered successfully.

If you have a out of gauge shipment you are looking to move from the USA, Europe and Asia to another part of the world, or need representation to manage the loading or discharge, contact us today and with our in depth knowledge we will be able to help.

Tags: BREAKBULK, OUT OF GUAGE